The Visionary Defender of Freedom and Democracy


Lincoln was the 16th President of the United States (1861-1865). He successfully led the country through its greatest internal crisis, the American Civil War, preserving the Union and ending slavery.

Lincoln was born in Harding County, Kentucky, grew up under poor conditions and had no religious ties. His formal education consisted of about 18 months of schooling, but he was largely self-educated and an avid reader. He had different jobs, but later he studied law and practised as a lawyer.

He began his political career in 1832 for the Whig Party and joined in 1854 the emerging Republican Party, which opposed slavery.

Lincoln redefined the American nation, arguing, that it was not born in 1789 by the U.S. Constitution, which allowed slavery; but in 1776 by the Declaration of Independence, after which all are born free and equal. He saw the Declaration as more than a political document. To him, it was, foremost, a moral document that had forever determined valuable criteria in shaping the future of the nation.

Lincoln was elected president in November 1860 with the deployment in office, on 4 March 1861 (re-elected in 1864). He handled the factions of the Republican Party well, bringing leaders of each faction into his cabinet and forcing them to cooperate.

As Lincoln´s election became more likely, secessionists made it clear that their states would leave the Union. On 20 December 1860, South Carolina seceded, and on 1 February 1861, it was followed by six other cotton-growing states in the deep South. The seven states declared themselves to be a new nation, the Confederate States of America.

Lincoln warned the South in his Inaugural Address: ”In your hands, my dissatisfied fellow countrymen, and not in mine, is the momentous issue of civil war. The government will not assail you.... You have no oath registered in Heaven to destroy the government, while I shall have the most solemn one to preserve, protect and defend it.”

The Emancipation Proclamation, announced on 22 September 1862 and put into effect on 1 January 1863, freed slaves in territories not under Union control. The abolition of slavery was official with the Thirteenth Amendment to the Constitution, which passed Congress before Lincoln´s death and was ratified by the states later in 1865.

Lincoln was a great speaker. During the civil war he kept his probably most famous speech, The Gettysburg Address. The speech was held at the inauguration of the Soldiers´National Cemetery in Gettysburg, Pennsylvania 19 November 1863. His speech was not only a tribute to the soldiers who gave their lives here. It redefined the civil war from just about preserving the Union to be a rebirth of freedom, which would bring true equality to all citizens, regardless of which state they lived in and a government of the people, by the people and for the people. In other words: Freedom, Equality and Democracy.

At the close of the war, Lincoln held a moderate view of reconstruction, seeking to speedily reunite the nation through a policy of generous reconciliation.

He was assassinated in Ford´s Theater in Washington on 14 April 1865.

Lincoln is considered one of the greatest U.S. presidents. He represents the traditional values of honesty and integrity as well as humane respect, minority rights and freedom in general. Lincoln is known to be the American president who abolished slavery, but he was also the president who defended democracy.


”Four score and seven years ago our fathers brought forth on this continent a new nation, conceived in Liberty, and dedicated to the proposition that all men are created equal. Now we are engaged in a great civil war, testing whether that nation, or any nation, so conceived and so dedicated, can long endure. We are met on a great battle-field of that war. We have come to dedicate a portion of that field, as a final resting place for those who here gave their lives that that nation might live. It is altogether fitting and proper that we should do this. But, in a larger sense, we can not dedicate - we can not consecrate - we can not hallow this ground. The brave men, living and dead, who struggled here, have consecrated it, far above our poor power to add or detract. The world will little note, nor long remember what we say here, but it can never forget what they did here. It is for us the living, rather, to be dedicated here to the unfinished work which they who fought here have thus far so nobly advanced. It is rather for us to be here dedicated to the great task remaining before us -that from these honoured dead we take increased devotion to that cause for which they gave the last full measure of devotion - that we here highly resolve that these dead shall not have died in vain - that this nation, under God, shall have a new birth of freedom – and that government of the people, by the people, for the people, shall not perish from the earth.” 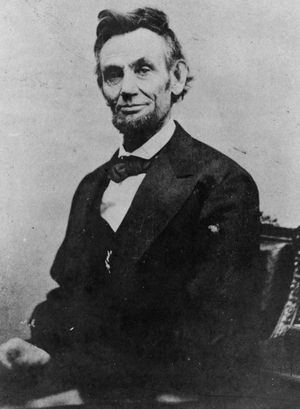