By Truth the Greatest Non-Violent Liberator


Mahatma Gandhi was an Indian politician and spiritual leader. He led India from colonial dependency into political independence and has inspired movements for civil rights and freedom across the world with his methods based on non-violence.

He was born in Porbandar, Gujarat in India. He was named Mohandas Karamchand Gandhi, but later called Mahatma (The Great Soul) or Bapu (Father).

He was influenced by his mother’s Jainism, and its concept of ahimsa (non-violence), but he was not particularly religious or spiritual as a child.

In 1888, he left India to study law at University College London. It was there, when faced with the different lifestyles of Westerners, he reflected on his own beliefs. As a vegetarian, he joined the Vegetarian Society, and began reading in earnest the scriptures of Hinduism, including the Bhagavad Gita, as well as doctrines on Buddhism, Christianity and Islam.

After returning briefly to India, Gandhi took a position at an Indian firm in South Africa. The post was supposed to be for a year, but he stayed for twelve. First he worked with Indians to oppose a bill denying Indians the right to vote. The bill passed despite his efforts. In 1897, he was nearly lynched by an angry white mob, but Gandhi refused to prosecute his assailants.

Gandhi led the Indian resistance against forced registration in South Africa. It was during this time Gandhi solidified his theories of peaceful resistance through civil disobedience, eventually forcing the government to agree to a compromise.

In 1915, Gandhi returned to India. He would spend the rest of his life fighting – through non-violence – for the independence of his country, for the rights of his countrymen, and for peace between his brothers. It was this last cause for which he would give his life.

Gandhi’s weapons included strikes, protests, and boycotts of British goods. He undertook long fasts as means of both self-purification and social protest and encouraged Indians to spin their own cloth and renounce British titles of nobility. He was imprisoned for many years, on numerous occasions, in both South Africa and India.

Following a mass protest that ended in violence in 1922, Gandhi served two years in prison for sedition. Afterward, he worked to bridge the gap between the Indian political divisions that had intensified during his imprisonment.

He organized numerous activities based on Satyagraha (often referred to as passive resistance or civil disobedience). Satyagraha literally translated means "hold on to the truth" and the pursuit of truth is also a central core of Gandhi's philosophy, the means of this quest is ahimsa (non-violence or love).

Gandhi continued his opposition to British rule throughout World War II. In 1947, India finally won its long awaited independence. To avoid an impending civil war between India’s Muslims and Hindus, Gandhi reluctantly agreed to support the partition of the country into two republics, India and Pakistan.

Just as Gandhi feared, the partitioning was accompanied by mass bloodshed.

On 30 January 1948, Gandhi was shot and killed by a radical Hindu, who were opposed to reconciliation with Muslims. At Gandhi´s request, his ashes were spread throughout India.

Gandhi led India to independence. He showed the world that social and political changes can be achieved not only through violence and terror, but also through love and compassion. He tried to meet all living beings and creations of nature with great respect and humility.

Mahatma Gandhi is officially honoured in India as the Father of the Nation; his birthday, 2 October, is commemorated as ”Gandhi Jayanti”, a national holiday, and world-wide as the International Day of Non-Violence. His numerous books and quotes contain so much wisdom that they have gained immortality. 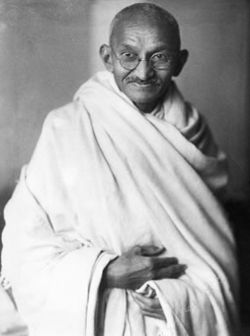