The Greatest Civil Leader of Our Time


Martin Luther King, Jr. was an American Baptist minister, activist and prominent leader in the American civil rights movement. His main legacy was to secure progress on civil rights in the United States and today he is a human rights icon.

He was born in Atlanta, Georgia as the second child of Reverend Martin Luther King, Sr. Both King and his father was born Michael. After visiting Germany in 1934 his father changed both of their names to Martin, in honour of the German Protestant leader Martin Luther.

King entered the Christian ministry and was ordained in 1948 at the age of 19 at Ebenezer Baptist Church, Atlanta, Georgia.

He began doctoral studies in systematic theology at Boston University and received his doctor´s degree in 1955.

He was the pastor of Dexter Avenue Baptist Church in Montgomery, Alabama from 1954 to  1959, when he resigned to move to Atlanta to direct the activities of the SCLC. From 1960 until his death in 1968, he was co-pastor with his father at Ebenezer Baptist Church.

King was a pivotal figure in the Civil Rights Movement. He was elected President of the Montgomery Improvement Association, the organization that was responsible for the successful Montgomery Bus Boycott (1955-56).

In 1957, King and other civil rights activists founded the Southern Christian Leadership Conference (SCLC). The group was created to harness the moral authority and organizing power of black churches to conduct non-violent protests in the service of civil rights reform. King led the SCLC until his death.

He visited the Gandhi family in India in 1959. The trip to India affected King in a profound way, deepening his understanding of non-violent resistance and his commitment to America’s struggle for civil rights.

His efforts led to the 1963 March on Washington for Jobs and Freedom, where King delivered his “I Have a Dream” speech. There, he raised public consciousness of the civil rights movement and established himself as one of the greatest orators in U.S. history.

In 1964, King became the youngest person to receive the Nobel Peace Prize for his work to end racial segregation and racial discrimination through civil disobedience and other non-violent means. He was awarded honorary degrees from various colleges and universities in the United States and foreign countries and he received numerous awards for his leadership in the Civil Rights Movement.

He was arrested thirty times for his participation in civil rights activities. By the time of his death in 1968, he had refocused his efforts on ending poverty and opposing the Vietnam War, both from a religious perspective.

King was assassinated on 4 April 1968 in Memphis, Tennessee.

”Martin Luther King, Jr. Day” was established as a U.S. national holiday in 1986 (on the third Monday of January).

Although extremely involved with his family, his church, the SCLC, activities for peace and justice, his world travels, and his many speaking engagements, King wrote six books and numerous articles.

Dr. Martin Luther King, Jr. is remembered as the greatest civil rights leader of our time - and the passion of his words lives on in his works and serve to celebrate the legacy of a man who gave his life for freedom.


In a radio address made during his final evening in India, King reflected:


“Since being in India, I am more convinced than ever before that the method of non-violent resistance is the most potent weapon available to oppressed people in their struggle for justice and human dignity. In a real sense, Mahatma Gandhi embodied in his life certain universal principles that are inherent in the moral structure of the universe, and these principles are as inescapable as the law of gravitation.” 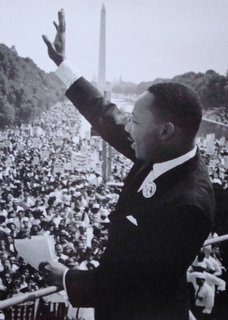