The Master of Reconciliation


Nelson Mandela was an anti-apartheid activist, nationalist leader and the first South African president (1994-99) to be elected in fully representative democracy. He was imprisoned by the apartheid regime for almost 27 years and his release in 1990 was a milestone in abolishing apartheid.

He was born in Mvezo in the Transkei, South Africa, as a son of Chief Henry Mandela of the Thembu dynasti. He was named Rolihlahla, but a teacher in school gave him the English name Nelson. In South Africa he is known as “Madiba”, an honorary title adopted by elders of Mandela's clan.

After the 1948 election victory of the Africaner-dominated National Party with its apartheid policy of racial segregation, Mandela was prominent in the ANC's 1952 Defiance Campaign and the 1955 Congress of the People, whose adoption of the Freedom Charter provided the fundamental program of the anti-apartheid cause.

Although they initially supported a non-violent struggle and was acquitted in the marathon Treason Trial (1956-61), Mandela and his colleagues after the shooting of unarmed demonstrators in Sharpsville in March 1960 and the subsequent ban on the ANC and other anti-apartheid groups saw no other options than armed struggle. In 1961, Mandela became the leader of the ANC's armed wing, "Umkhonto we Sizwe” (Spear of the Nation or MK).

Among opponents of apartheid in South Africa and internationally, he became a symbol of freedom and equality, while the apartheid government and nations sympathetic to it condemned him and the ANC as communists and terrorists.

Sustained campaigns from the ANC and international pressure led to Mandela's release on 11 February 1990 on the orders of State President F.W. de Klerk, who also repealed the ban on the ANC.

In 1993 Mandela and de Klerk were jointly awarded the Nobel Peace Prize for their efforts in bringing apartheid to an end and establish democracy in South Africa. In addition Mandela has received many South African, foreign and international honours.

As president of the ANC (1991-97) and the State President of South Africa (1994-99), Mandela had overall responsibility for the transition from minority rule and apartheid, winning international respect for his advocacy of national and international reconciliation.

Mandela has frequently credited Mahatma Gandhi for being a major source of inspiration in his life, both for the philosophy of non-violence and for facing adversity with dignity.

Since Mandela in 1999 resigned as president he was spokesman for various social and human rights organizations. He is currently a celebrated elder statesman who continues to voice his opinion on topical issues.

In 2001 Peter Gabriel and Richard Branson took their idea of The Elders – a new gathering of world leaders to guide and support our ”global village” – to Nelson Mandela. Mandela was immediately enthusiastic and, with help of his wife Graça Machel and Desmond Tutu, he set about bringing together a group of Elders; free from political, economic or military pressures.

Mandela's 90th birthday was marked across the country on 18 July 2008, with the main celebrations held at his home town. A concert in his honour was also held in Hyde Park, London. In a speech to mark his birthday, Mandela called for the rich people to help poor people across the world.


He closed his statement on 20 April 1964 at Pretoria Supreme Court with these words:


“During my lifetime I have dedicated myself to the struggle of the African people. I have fought against white domination, and I have fought against black domination. I have cherished the ideal of a democratic and free society in which all persons live together in harmony and with equal opportunities. It is an ideal which I hope to live for and to achieve. But if needs be, it is an ideal for which I am prepared to die.” 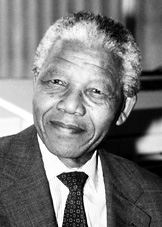