The Manifestation of Love and Compassion


H. H. the 14th Dalai Lama, Tenzin Gyatso, is both the head of state and the spiritual leader of Tibet.

He was born to a farming family, in a small hamlet located in Taktser, Amdo, northeastern Tibet. At the age of two the child, who was named Lhamo Dhondup at that time, was recognized as the reincarnation of the 13th Dalai Lama, Thubten Gyatso.

He began his monastic education at the age of six. In 1959 he passed his final examination in the Jokhang Temple, Lhasa with honours and was awarded the Geshe Lharampa degree.

In 1950 His Holiness was called upon to assume full political power after China's invasion of Tibet in 1949. In 1954 he went to Beijing for peace talks with Mao Zedong and other Chinese leaders. But finally, in 1959, with the brutal suppression of the Tibetan national uprising in Lhasa by Chinese troops, His Holiness was forced to escape into exile. Since then he has been living in Dharamsala, northern India, the seat of the Tibetan political administration in exile.

In 1963 he presented a new democratic constitution: "The Charter of Tibetans in Exile”. In 1987 he proposed ”The Five Point Peace Plan for Tibet” as the first step towards a peaceful solution to the worsening situation in Tibet. In his address to members of the European Parliament in 1988, he made another detailed proposal elaborating on the Five Point Peace Plan. He proposed talks between the Chinese and Tibetans leading to a self-governing democratic political entity for all three provinces of Tibet. This entity would be in association with the People's Republic of China and the Chinese Government would continue to remain responsible for Tibet's foreign policy and defence.

His Holiness has a responsibility to act as the free spokesperson of the Tibetans in their struggle for justice until a mutually beneficial solution is reached between the Tibetans and Chinese.

The Dalai Lama is seen as a manifestation of the Buddhist aspect of love and compassion: Chenrezig. The life vocation of H.H. the Dalai Lama is to promote human values as compassion, forgiveness, tolerance, appreciation and self-discipline.

In 1989 H.H. the Dalai Lama was awarded the Nobel Peace Prize for his non-violent struggle for the liberation of Tibet. He has consistently advocated policies of non-violence, even in the face of extreme aggression.

He has met with presidents, prime ministers and crowned rulers of major nations. He has held dialogues with the heads of different religions and many well-known scientists.

Since 1959 he has received over 84 awards, honorary doctorates, prizes, etc., in recognition of his message of peace, non-violence, inter-religious understanding, universal responsibility and compassion. He has also authored more than 72 books.

His Holiness describes himself as a simple Buddhist monk.


The Website of the Office of His Holiness the 14th Dalai Lama:
http://www.dalailama.com/ 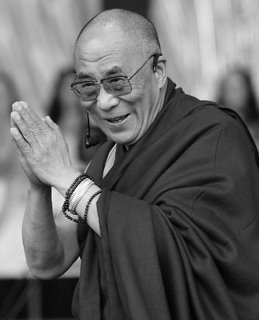